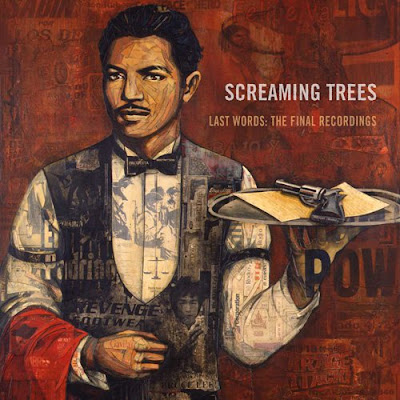 Here's some news to jazz up your Wednesday: a new Screaming Trees album containing remastered versions of their final recordings will be released early this August. The album is titled "Last Words: The Final Recordings" and was recorded in 1998-1999.

This news is as posted on Barrett Martin's facebook page earlier today:
"Hey Folks, I'm quite happy to announce that last night, Jack Endino and I finished mixing a new Screaming Trees album. Its the unreleased album we recorded in 1998-99 and its finally coming out on August 2nd on my label. Mark Lanegan, Van Conner, Lee Conner, and myself felt that these final songs should be heard, and soon they shall be. Here's the album cover, done by the renowned artist Erin Currier."
Yes, yes and yes!
Posted by Cara at 4:04 PM