Despite his minimal efforts in the music world in the past decade or so, Kim Thayil remains to be one of my favorite musicians. He seemed to have dropped completely off the radar, which is why i was surprised and a little starstruck to see him in person last summer at the S 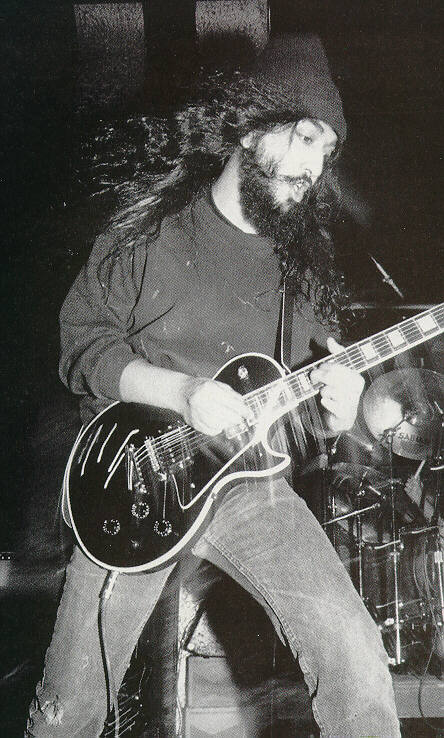 ub Pop 20th anniversary festival watching Comets on Fire. There havent been any decent interviews with him in quite a while either, which is why I was pleasantly surprised to find this one in Rolling Stone magazine, which includes some interesting information about an upcoming Soundgarden boxset and B-Side releases. I also recommend you look up the fairly recent "Tadgarden" performance which occurred in Seattle, in which Soundgarden performed minus Chris Cornell and plus Tad. Definitly an interesting combination. Here is the interview with more information about all of this:

"What have you been up to since Soundgarden's split?

Mostly I've done session stuff with friends now and then.
Most of the time, I've declined opportunities to play live, record or form bands. Just keeping it a little bit "lower,"
so I have time to do other things besides be on the road [laughs]. I think the one I've enjoyed the most is sitting in on the Altar sessions with Sunn O))) and Boris. There's a sort of pop-grunge singer from Japan, a woman named Aya, that was being produced by Adam Kasper. Matt Cameron and Krist Novoselic also played on that record, and I played solos on five songs. The album [titled Senjou no Hana] was only released in Japan. Spent a long time mixing that No WTO Combo record [Live from the Battle in Seattle, with Novoselic and ex-Dead Kennedys singer Jello Biafra]. Also, the work I did with Steve Fisk — both with Pigeonhed and the last solo Steve Fisk record, 999 Levels of Undo, I wrote some parts and came up with some leads. Besides working with the guys from Sunn O))) and Boris, I really like the work I've done with Steve Fisk. Believe it or not, in the early '90s, I did some TV commercial soundtrack with Steve! It was a Christmas spot — lots of weird, chaotic noise — for a retail store.

How did the recent "3/4 Soundgarden reunion" performance come together?

Tom Morello was coming through with the Justice Tour, and he had asked Susan Silver [Soundgarden's manager] — Tom wanted to get some notorious rock locals. Ben Shepherd and I were asked separately — we were going to be on the bill separately. As things worked out, it was getting close to the gig date, and Ben had not put together any project, and the guys that I was jamming with, our ideas were not gelling. We were going to do some old punk rock covers, and have [Mudhoney's] Mark Arm sing. That fell through. And Tom called, and said, "Would Ben and Kim like to join me on stage to do 'Spoonman'?" And we said, "Sure. But we heard Matt is coming down to the show, and I'm not going to play it in front of Matt — I would play it with Matt." So I called Matt, and he said sure. Ben said, "Let's do the first single, 'Hunted Down'/'Nothing to Say,' and then we'll do 'Spoonman.'"
And then this left a problem with who we would get to sing with us. A lot of people that I asked were real hesitant — they didn't want to replicate Chris' performance. So it had to be Tad [Doyle], right? It had to be the guy with God's Balls to say, "Fuck yeah, I'll do it!" We went down to the Pearl Jam rehearsal space and had one practice on a Monday and rehearsed for an hour and a half. The next day, we went over them at soundcheck, and then we busted out those three songs [at the Crocodile Cafe].

How was it playing again with Ben and Matt?

It was a blast. Playing with Ben and Matt carried a lot of sentimental weight, but there was also the novelty of playing with another longtime friend, which is Tad. That kept it fresh and exciting, so it wasn't just some backwards step. The whole thing was pretty much a lark and for fun.
Looking back, what's your favorite Soundgarden album and why?I think I have three albums that stand out for different reasons. Screaming Life is distinctly different with Jack Endino's production and our original songs from that period that Hiro [Yamamoto, original bassist] played on. I just like those songs, and the sound of the production — the ambience and the feel. Just the way the room sounds. We recorded that at Reciprocal Studios, which a lot of early Sub Pop records were recorded at, including Nirvana, Mudhoney and Tad. And Superunknown. Once again, it's the ambience — the implied and created room. And I like the material and the performances very much. There's a dark feel to it that is powerful, and is great with headphones on. Badmotorfinger I love because it sounds great in a car. It's got a lot of weird quirks in it — as is typical with Soundgarden. We always added that element of crazy and weird. We had an ability to not take ourselves too seriously, while committing to the heaviness. Sort of like laughing while kicking your ass.

What exactly is the status of the much talked about Soundgarden box set of B sides and unreleased material?

It's a matter of just working with the record company. Y'know, a year or two after we disbanded, A&M Records disbanded — it got bought, and all of our friends there got fired. The record company dissolving and our management company dissolving put a big hit on Soundgarden's catalog and merchandise. I think our merchandising catalog suffered quite a bit due to neglect from the record company and management. Which wasn't intentional, it's just the record company was gone and the management company wound up being a P.O. Box and a voicemail.
Basically, a box set slowly and surely will happen. We need communication with the band, our record label and management. I really cannot emphasis my apologies to all our fans worldwide — it pisses me off to no end that you can't walk into a mall, go to the local head shop or record store, and find a Soundgarden T-shirt or poster. It bugs the hell out of me, and everyone in the band. Just be patient — nobody's more bugged about it than I am. It's all inertia, if it's a big giant stone wheel, it comes down a hill really fast. But it goes up a hill very slow. Right now, it's at the bottom of the hill, and we've got to push it back up.

What will be on the box set?

Stuff that was released only in Europe, Australia, and Japan, on movie soundtracks, sessions we did for John Peel in England, and then stuff that was never released — demo versions of things, alternate versions of songs, and songs that were recorded, but never released in any form, that we would simply have to mix and maybe re-edit, which would be like brand new Soundgarden songs. Songs that no one's heard, except for maybe a few people close to Soundgarden's circle.
What are some titles of these unreleased tracks?"Dirty Candy," "Ocean Fronts," "Open Up," "Summation" — that was a pretty heavy song, in 5/4 time. "Ocean Fronts" is a little bit more of a trippy, arpeggiated song. A song called "Beast," which is going to sound exactly like the title. "Beast" and "Summation" were really strong songs live — from the mid-late '80s. I cannot believe those two songs have never been released. "No Shame" is another title. There's enough stuff out there to fill up three or four albums. There's enough original stuff that's been released but hasn't been compiled — B sides — to make an album. There's enough covers to make an album. There's enough remixes that Moby, Steve Fisk and Bill Rieflin did, that could constitute a pretty interesting EP. There's enough unreleased stuff to make an album. It's just getting the business and creative machine on the same page.

What was your reaction to being one of Rolling Stone's 100 Greatest Guitarists?

That was great — definitely a proud moment. Of course, like any fan, I had my criticism of the list — as I'm sure most people would have. There was an emphasis on singer-songwriters, who I think their strength really lies in their ability to sing, perform, or write songs, not so much in their ability to play guitar. With one exception: Jimi Hendrix. And there's some guys who definitely should be on that list that aren't. But I'm glad that I made it.
Ben told me he thinks that if Soundgarden were to get back together, you guys could pick up exactly where you left off.I think he's right. We all play enough and are acquainted with the material enough that I think it would take a few rehearsals. When Ben, Matt, and I got together with Tad, it was like falling off our bike and getting back on.

That said, could Soundgarden ever reunite?

People would have to want to. I think more importantly, tending to the merchandising catalog is something that would be satisfying for the band members and for the fans. I never say never ... but I'm not losing too much sleep over it, either. "

http://www.rollingstone.com/news/story/29218126/the_soundgarden_songs_you_havent_heard_kim_thayil_breaks_his_silence
Posted by Cara at 12:53 PM