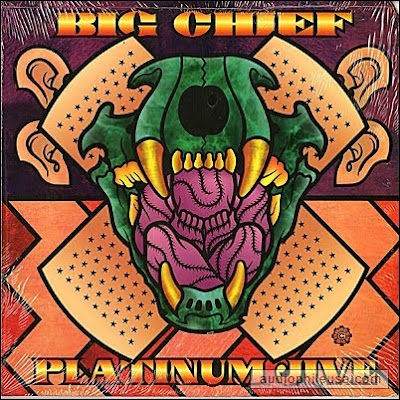 Oh man. I finally get to post this one. Here is an album I've been meaning to post since I started this blog - "Platinum Jive" by Big Chief. I absolutely love this band and this is my favorite thing they released in their too-short existence as a group (well... aside from "Face". I think it's a tie). It's still catchy as hell but with a bit more grit and less funk (but still a copious amount) than their previously released work. It's a great mix of fun and grime and actually, in thinking about it further, I think a major part of the reason I'm so in love with this unique work is the track "John's Scared" which I'm basically addicted to. And "Locked Out". Ugh. Ok. Maybe it's just the entire album.
1. Lion's Mouth
2. Takeover Baby
3. John's Scared
4. M.D. 20/20
5. Map of Your Failure
6. Bona Fide
7. Armed Love
8. Philly Nocturne
9. Locked Out
10. All Downhill From Here
11. The Liquor Talkin'
12. Sick To My Pants
13. Your Days Are Numbered
14. Clown Pimp
15. Simply Barry
16. Lot Lizard
DL: "Platinum Jive"
Posted by Cara at 4:46 PM