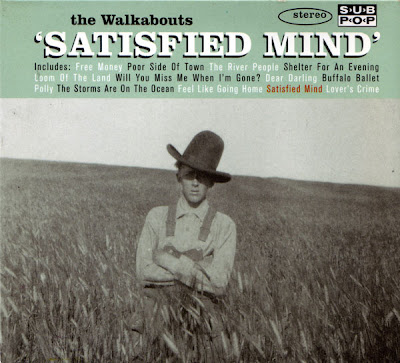 "This is a collection of other people's songs. Some were found stacked in the back of the closet, and others were found lying in the middle of the floor. All of them shared a powerful pull.
On this album, lots of different types of instruments (many of them acoustic) were used. Some of these were played by the band, and others were played by musicians we greatly admire. It was a privilege to work with them.

It has never made sense to us that songs should be tied down to one specific voice or place or piece of product. Sometimes songs like to travel. Hopefully, we've given these songs that chance.

"Satisfied Mind" by The Walkabouts - what can I say? You would be doing yourself an injustice by not listening to this. As a pretty visual person when it comes to music, I feel like this album would make an excellent soundtrack to walking along a dusty highway or through a desolate field. (See the cover art of this album which fits this grouping of songs perfectly). Just some nice, easy listening for a Sunday afternoon like today. This was released in 1993 on Sub Pop and I also included the original songwriters on the tracklisting to reference.