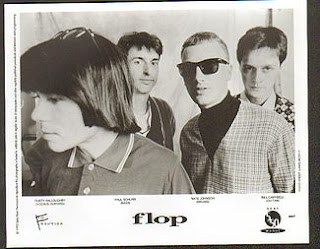 not many folks know of this band (well...most folks that i know)

i was first turned onto the band waaaaaaay back in the early 90s via the radio (believe it or not...they actually played music that somewhat decent back in the day...and i used to have a crapload of cassettes filled with it...yeah...i was one of those people)

if you've ever seen the movie HYPE!...flop was the band being recorded in a garage by kurt bloch (one of the guitarists from the band the fastbacks) during the middle part of the movie (their vocalist was wearing a gas huffer hat)

and if you've never seen HYPE!...well...this is the place where'd i'd usually go off on a rant...but i'm not gonna waste the words...you know what you did...

so what you get here is 7" of "pop punk" (but not of the blink 182 persuasion or their ilk...maaan...i feel shitty for even mentioning them here) that comes in the form of an original song and 2 covers (devo/the jam)