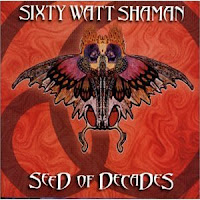 this is the kind of action that you want going down during a backyard bbq (and it'll put bbq sauce in your beard...and if you don't have a beard already...it will make you grow one just so you can put some there)

i was supposed to see these guys play in chicago back in '03 with clutch and a band called flybanger...i was stoked as i had just gotten into sixty watt shaman...and i'm a HUGE clutch fan (as we all should be)...but...the girl i was with at the time apparently thought it would be a bad idea to drive 2 hours in a snowstorm (and yes...i called her a sissy)...so for weeks afterward i was taunted by 2 unused tickets...and from what i'd heard about the show...there were only about 20 people there

that was a good story,grampa

if you consider yourself a fan of anything that's been posted here...you really REALLY need this as well

fine...i'll throw a few band names out there to help in the selling of the band:

the mighty nimbus (vocalist dan soren was a member at one time...and drummer pete campbell currently plays guitar in the band)