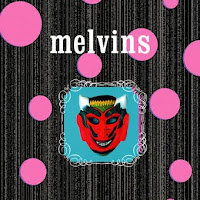 and for those of you out there that don't know what the hell it was i was talking about...i've already given you a gateway into the cows...

but you see...i'm not going to go into an explanation of who the melvins are...because simply put...if you don't already know...then you probably don't need to know (and really...why are you reading this blog?...are you in a public place trying to look cool?)

maybe i'm being a little too harsh and judgmental

maybe you just recently broke out of some serial killer's basement where you'd been locked away for the past 20+ years...and you're just reading this over someone's shoulder while you're waiting for help to arrive...

and no...the person holding this isn't a witch

when asked in the interview about what he'd considered his best melvins moment...he'd mentioned the HOSTILE AMBIENT TAKEOVER album

but instead of posting that...you get this

and what this is are the b-sides (in case you hadn't already put that together for yourself) to the album's singles (the band released the album per song in 7" form as well...and the b-sides are covers...except for the song "foaming")

so you...reading this over the shoulder...when you finally manage to get your life back on track and whatnot...this will be here waiting for you