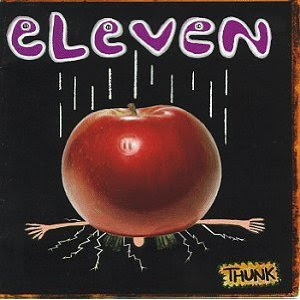 some of you out there may be unfamiliar with this band...and that's a little sad

i had randomly picked up their 1993 SELF-TITLED album after reading a small review in some magazine...i had never heard of them before that...but after buying the album...i hunted down everything i possibly could from the band (which turned out to be only one other album...and i had to special order that from the local music store...this isn't something you'd usually just see on the shelves...which is also sad)

the band is from los angeles...but had their fingers in that whole grunge thing (but really...who didn't back then?)...drummer jack irons left the red hot chili peppers (and i'm not calling them grunge) back in 1988 because of guitarist hillel slovak's heroin overdose...and then joined eleven in 1990...who then quit the band to play in pearl jam in 1995 (he laid down some drum tracks on this album before leaving...soundgarden's matt cameron fills in on 4 songs)...and then somewhere down the line members alain johannes (vocals/guitar) and natasha shneider (vocals/bass/keyboards) backed up chris cornell on his first solo album EUPHORIA MORNING (but if you ask me...his first solo album was DOWN ON THE UPSIDE...that's right...i said it)

alain johannes and natasha shneider later went on to become members of queens of the stone age (though mostly for touring...alain appears on their SONGS FOR THE DEAF/LULLABIES TO PARALYZE/ERA VULGARIS albums...natasha only appears on SONGS FOR THE DEAF)...they also pop up on some DESERT SESSIONS material

but...all of this came to an end on july 2nd,2008 after natasha shneider passed away from cancer...at the eerie time of 11:11am (true story)

do yourself an awesome favor by downloading this...you won't regret it (and if you do...i'm sure there's plenty of crap for you to listen to on the radio)...and seeing as how i'm a giver...i've also thrown in some b-sides from this album