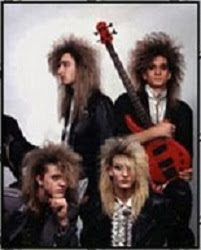 look at that picture up there

take a long hard look at it

now...you wouldn't think a band that looks like that would write such songs as "man in the box" or "hate to feel" or "god am"...would you?

in case you hadn't already put it together...that's alice in chains

before they became the sludge factory they were known as...they were a glam/funk metal band known as diamond lie...then alice 'n chains

i don't know exactly happened to the band in the 3 years between this and the FACELIFT album (i'm thinking someone switched their cocaine with heroin)...but i'm glad it did because i prefer my alice in chains with less funk and less cowbell and less synth

and am i the only one that hears early motley crue all over this?