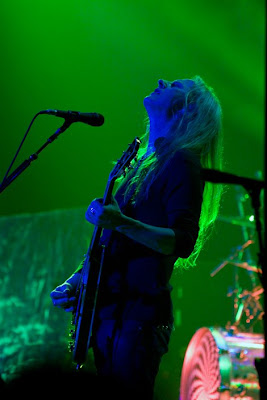 I confess that I have been guilty of talking a lot of shit about the new Alice in Chains.

Rave reviews from stonerrock.com? Ignored. Rave reviews from friends? Ignored. When I saw they were playing Madison Square Garden on the 24th I went back and forth about buying a ticket for weeks thinking that it would be a beyond mediocre show. Still, I ended up buying a ticket a couple hours before it started since I never actually gave them a fair chance and just needed to know.

Now... I am the most cynical of cynics when it comes to this type of thing, but as soon as they started playing "Them Bones" I was grinning. When they got to their second track "Dam That River" I was standing (and still grinning like an idiot). We all know there are issues when replacing a vocalist in a band, but when Duvall was harmonizing with Cantrell it sounded great. (Obviously not the same, but great). The angsty and awkward 15 year old in me that used to hole up in my room listening to "Dirt" was pleased, too - this band was my soundtrack and their songs are still really important to me. As for their new material, I think I was ignoring the fact that Jerry Cantrell still has a part in writing these songs and am now planning on picking up "Black Gives Way to the Blue" finally.

In saying all this, I really can't decide if it's tragic or a fitting tribute that they're taking songs Layne Staley wrote about his heroin addiction before dying of an overdose and filling stadiums by playing them, but I'm leaning towards the latter since, after all, they have to move on at some point and Jerry Cantrell is (arguably) a more important part of the group, anyways. I have to give them longevity points, too. I mean, here is a band that moved from being one of the most important bands of the 90's to having their lead singer die (and didn't Mike Inez get arrested as some point, too?), and now they're making a huge comeback which is cool. Seeing all the different age groups that came out to this show was also cool.
Seriously... I really wanted to hate on this but now I can hate no more. So call me a reformed cynic, and give this a fair shot and see them if you get a chance.
Now... when is Nirvana getting a new vocalist? (...Kidding.)
***picture stolen from Brooklyn Vegan***
Posted by Cara at 8:46 AM