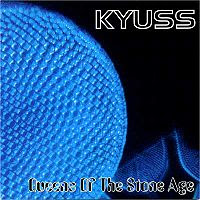 in the spirit of posting them crooked vultures and queens of the stone age...

the old goes into the new...the last kyuss and the first qotsa (technically second...their first release was a 2 song 7" the year before...both songs can also be found on this)

i'm hoping that by you (hopefully) being a queens of the stone age fan...you'll know who kyuss is/was

well...for those of you that don't...kyuss are considered one the first "stoner rock" bands (even before the band sleep)...and a then 14 year old josh homme played guitar for the band (then called the sons of kyuss)

but enough with the words

am i the only one that while listening to the them crooked vultures album feels the need to also listen to the queens of the stone age album SONGS FOR THE DEAF?

DL kyuss/queens of the stone age split
Posted by ipecac at 12:35 AM