As you may know, Sub Pop re-started the singles club this year, and since i've been getting a 7" in the mail each month I'm now going to begin uploading them for your listening enjoyment.
(I'm going to stop uploading the classic Sub Pop singles for a while in favor of these since they're way harder to come by since they're obviously a few decades newer.)
Here's the first single that was sent out - i believe this was also the first thing Om released with their new lineup. It's called "Gebel Barkal" and, while diverting from the old lineup's sound a bit, still has a deliciously psychedelic, tribal feeling to it. 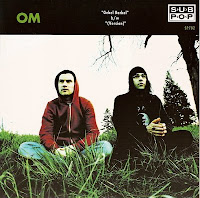