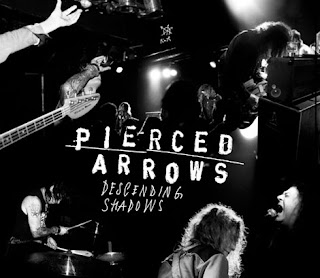 This is Pierced Arrows' latest released titled "Descending Shadows". It's hard to believe this album was released in 2010 becuase it kind of just sounds like a compilation of some really tight, bass heavy, dark versions of Dead Moon songs; actually, there are a few songs off this album that sound like they should come straight off an old Dead Moon album, but why shouldn't they? This is, after all, a project of Fred and Toody and it's just really cool that they're still releasing rock music of this calibur even in their -okay- slightly old age. My theory is that they're both comparable to a fine wine and are just getting better with age.... or they're just superhumans that just keep rocking harder with age... Whatever the case, this album is really, really well done and contains some of the coolest lyrics and most groovin' basslines I've heard in a while. Give it a listen if you like Pierced Arrows, Dead Moon, or just well done, catchy rock music.