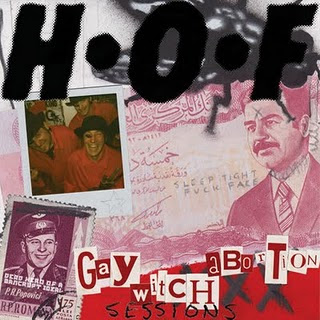 Thomas Hazelmyer's project H.O.F did a collaborative EP with fellow Minneapolis band Gay Witch Abortion last year and here are the unholy results. Track titles like "Drinking With Yow" and "Choking on Vomit" let you know what you're getting into with this EP which is some filthy-as-sin noise. This sounds something like the Jesus Lizard mashed up with Pissed Jeans and then being roughed up and buried in a pile of dirt and garbage. Okay, that was kind of a wierd description but what I'm trying to say is that this is messy as hell and uglier than your aunt Prudence in the morning. Seriously... I can't stop with the wierd descriptions today. Listen to this EP and try to type out something coherent and you'll understand. Anyways, only 100 copies of these were released and sold at $70 a piece. So here you are. You can paypal me the money later. (Was that in bad taste?)