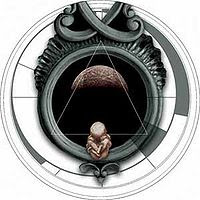 but on this album...they slow waaaay down and slab on the doom

this is one song

from the opening riff (which sounds exactly like the one that opens the jucifer song "she tides the deep")...you can tell you're about to enter into something epic (and i don't even like using that term...but it's fitting)

so if you're a fan of the above mentioned jucifer song/album (IF THINE ENEMY HUNGER)...the melvins jam "boris" (or any early melvins for that matter)...the cardinale album 31:13...sleep (duh)...and you didn't think "in-a-gadda-da-vida" was heavy enough...

this be for you

DL: halls of amenti
Posted by ipecac at 9:17 AM