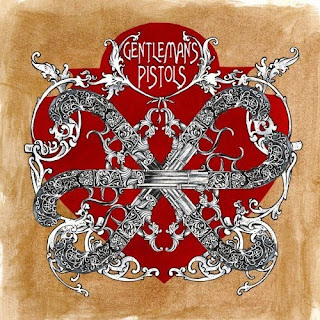 I guess it should be obvious by now that I'm really big on 70's influenced hard rock, which is why I immediately loved the blues tinged, heavy rocking, frantic grooving style of this self-titled album by Gentleman's Pistols.

There are hints of the bluesy, soulful style of Cream, the steady rolling, heavy groove of Black Sabbath, and the frantic, rocking style of Sir Lord Baltimore all over this album which was (misleadingly) released in 2007 on Rise Above Records. What sets this apart from bands of a similar tread is, first of all, the really apparant and awesome Sir Lord Baltimore influence, and the fact that that they even manage to throw in some strange comedy (like on the track "Heavy Petting") and hints of doom metal amongst what would otherwise be a rock n roll album. All around a really enjoyable release and is definitely recommended for fans of Witchcraft, Graveyard or Night Horse.

DL: "Gentleman's Pistols Self Titled"
Posted by Cara at 11:58 AM