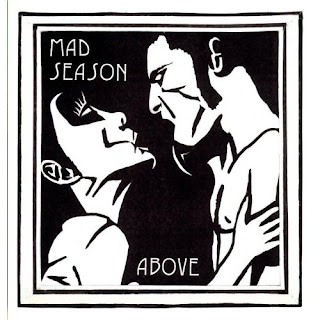 I was initially a bit hesitant about posting this one since Mad Season was definitely one of the better known 90's supergroups... which is sort an obvious statement considering this band was fronted by Layne Staley with Mike McCready on guitar, John Baker Saunders (who would be of the Walkabouts) on bass and Barrett Martin on drums. I decided to post this anyways since their only album called "Above" has stuck with me for years and is a really powerful, groove heavy and rocking grouping of songs. The best thing about Mad Season to me is that they took the 70's blues rock influence and used it to create a really powerful and innovative grouping of songs unlike, say, Temple of the Dog who basically just parodied it. Mark Lanegan even graces this album with his presence a couple of times on the track "I'm Above" and the jazz laced track "Long Gone Day".

So in conclusion... I'm not sure I can say that "Above" is really a hidden gem, (actually I think I bought my copy at Best Buy, so no, it's definitely not) but if you haven't heard it yet maybe you should put your Pearl Jam albums in the hands of your dad where they probably belong and give this a listen instead.