Compilation: Welcome Back to MeteorCity

I was really happy to recieve the "Welcome Back to MeteorCity" compilation as a gift with my last All That is Heavy order - a recently released sampler from the MeteorCity label which is the house record label of stonerrock.com/All That is Heavy. (you know you order too much vinyl when you recieve a free gift with your order along with a note saying "thanks for all your business over the years", but I guess it's nice to be appreciated!).

For those of you who aren't familiar with the now legendary first MeteorCity sampler, here's what stonerrock.com had to say about it: "MeteorCity “Mach 1” released debut albums and/or very early recordings by Unida, Nebula, Dozer, The Atomic Bitchwax, The Hidden Hand, Goatsnake, Eternal Elysium, Spirit Caravan, Solace and many, many others! MeteorCity “Mach 2” has, in their first three years, released debut and/or new albums by heavy-hitters such as Black Pyramid, Snail, Nightstalker, Elder, Farflung, Flood, Freedom Hawk, SardoniS, Village of Dead Roads and Let the Night Roar, amongst many others."

This is a fantastic compilation and a great way to discover new tunes since delving into the material released by MeteorCity can be a little daunting, but after getting into it there is a huge spectrum of amazing heavy bands to discover and I can confidently say you will come out of this with one, two, three... or maybe a huge list of bands to check out further.
So you'll have to excuse me... I have a new record label to be obsessed with. 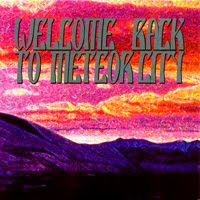 DL: "Welcome Back to MeteorCity"
Posted by Cara at 8:47 PM