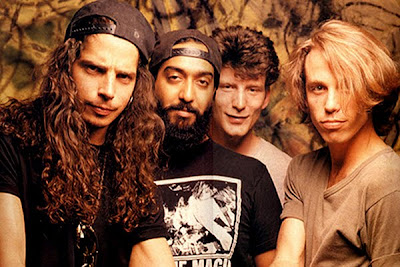 The recently reunited Soundgarden just premiered a new (old?) track called "Black Rain" from the Badmotorfinger-era sessions. This track was dug up by the band and reworked a bit, and apparantly Chris Cornell added new vocals in parts, etc.
Yes... this is the track that will appear on Guitar Hero. Yes... this is also the track that will appear on their new "greatest hits" album. But negative connotations aside, this is a really cool track (you can basically just expect something from Badmotorfinger) and the link below also includes a video of their Lollapalooza performance and some audio of the band talking about the reunion.
Listen to "Black Rain"
Posted by Cara at 11:49 AM