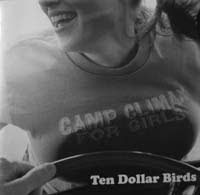 i saw these fellows from alton,il in concert back in 2004

i had never heard of them prior to the show (as i was originally going to see a band called the great redneck hope)...and they had kinda just gotten thrown onto the tour...and all i needed to do was see the band's name to know that i was gonna be in for a pretty sweet time (and i'd totally throw down cash money to watch a movie with that title...like you wouldn't)

so if you like yerself a little bit o' post-TRANSITIONAL SPEEDWAY LEAGUE clutch...the direction the melvins seem to be going into lately (sans second drummer and boredom...that's right...i said it)...some queens on the stone age...

sadly...the band split up back in 2005...and this was their only album

DL: ten dollar birds
Posted by ipecac at 1:41 AM