It's a strange honor to have been invited to write for a blog whose title comes from a song that I co-wrote some 20 years ago. "Ritual Room" was the sixth song on Skin Yard's third album Fist Sized Chunks, an album that marked what was probably the darkest place in the bands history. The record is a thick murky mess of a record seething with anger and a subterranean tension, which for many makes it their favorite record from our schizophrenic output over the 6 1/2 years that we were active as a band. 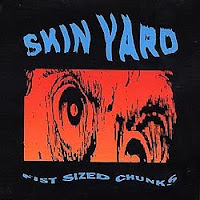 The record was recorded during the spring and summer of 1989 after the tour that we less-than-affectionately refer to as the "Tour From Hell." Without going into detail, we spent the better part of that 50 day tour at each others throats, consistently on the verge of breaking up. Our van – in lock step with the rest of us – was barely holding together, blowing a head gasket in Tucson, overheating in the deep south on the way to a show in Florida, leaving us stranded in 95 degree weather for 8 hours with grease up to our shoulders, trying to find somebody who could fix it on a Sunday. At one point, our then-drummer Scott threatened to leave the tour midway, a decision that we were more than happy to allow him to do at that juncture. He stayed on, but by the end, we had effectively broken up, just barely keeping it together enough to record Fist Sized Chunks.

While it's still a difficult record for me to sit down with, it does manage to capture the ragged, chaotic and strangely inspired collective headspace of the band during that year. The playing was not our strongest, the production is probably the murkiest of all the Skin Yard records, the tempos are unsteady throughout, and yet the record somehow manages to channel an interesting mix of psychedelic and aggressive, two elements that were not often found together in the Grunge scene. The opening song, “Slow Runner” features Tom from The Accüsed and later of Gruntruck, while the first song on the second side (back from when albums were sequenced with two distinct sides in mind) “Gentle Collapse” features the wonderfully damaged "stylings" of Helios Creed.

The title, Fist Sized Chunks seems in retrospect to be the ideal title, each song a thick oily chunk of vitriol, darkly psychedelic, careening carelessly and dangerously close to the edge of...something.