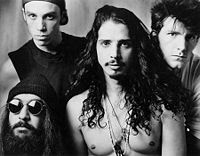 i wasn't actually able to find a cover for this...so you get to gaze upon the boys circa 1991

remember when chris cornell has his handsome locks?...and his matinee idol good looks?

and then he went on to front the band audioslave?

it's always good to be able to listen to this and think back "ah...remember when..."

and now what you need to do is go ahead and listen to the above mentioned album...take it all in...from ben shepherd's plodding basslines to matt cameron's unpredictable drumming to the epitome of grunge guitar playing of kim thayil to the almost cock rock vocals of chris cornell