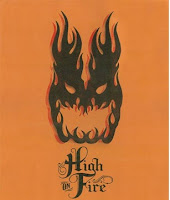 now...i really shouldn't have to go into who high on fire is

but for those of you that don't really know who/what high on fire is...let me give you a tiny timeline:

lead singer/guitarist matt pike formed this band after his previous band (this little band called sleep) split up back in 1998 (but reformed for a few shows over in england as part of the all tomorrow's parties festival back in may of this year...his other 2 bandmates went onto form the band om)...and then later on down the line took in former melvins' bassist joe preston for a short time

and that's all you really need to know

so if you like any of the above mentioned bands...or that whole "stoner rock" thing...or sweaty bikers...

http://www.mediafire.com/?wyknmmg2nmn
Posted by ipecac at 12:58 AM