Some Tracks from the U-Men

Well, its a goddamn Sunday.. and I can't really think of anything better to listen to then the U-Men. They have a small discography which is unfortunate, yet it made it a lot less difficult for me to choose a few of my favorite tracks. I doubt they need any more introduction, but the U-Men are really the epitome of raving, schitzophrenic, primal, bluesy punk-rock. I guess they were considered legends in Seattle for a reason. They're insane and pretty much everything they've released is awesome. 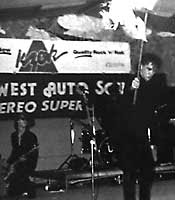 Like I said, this is just a handful of my favorite tracks.