Live Recording: The Monkeywrench - ...And One Really Nervous Guy 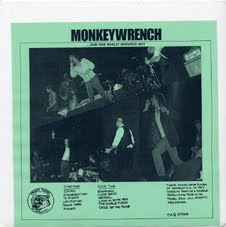 you've seen the bands mudhoney and gas huffer and lubricated goat mentioned here and there around this blog...

so what this is one of those "supergroups" made up of members of mudhoney (singer/guitarist mark arm and guitarist steve turner)...gas huffer (guitarist tom price)...poison 13 (guitarist tim kerr)...and lubricated goat (drummer martin bland)

music-wise...you should already know what these folks are throwing down (all you need to do is see mudhoney and gas huffer to figure that out)

this is a bootleg of a show they played over in the UK back in may of 2000 opening for pearl jam (eddie vedder makes an appearance during the opening number...and you know...i had never realized it before...but mark arm and mr. vedder kinda sorta sound alike)