Winters is a really eclectic band. They're pretty Sabbathy but keep the influence to an enjoyable emulation rather than a rip off. Actually, it's difficult to put into words... I would describe their sound as a kind of wierd Nirvana-meets-the-Melvins mash-up with a spacey, other worldly atmosphere. Sound strange enough for you? Listen to it and you'll see what I mean.
On a side note - it's kind of funny; i've been noticing a new wave of heavy rock bands that are spacier and sludgier than the preceeding "stoner" wave of bands and generally put a focus on elements and nature rather than drugs and psychedelia: Dead Meadow, Smoke, Night Horse, Witch, Black Mountain... Winters... and there are many more. I guess this is how the genre is evolving? Maybe I'm just behind on this trend? Any thoughts? 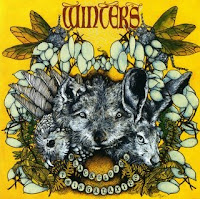 5. Life Was So Simple