Okay, so this isn't going to be one of my common "this is so heavy it will crush your bones, steamroll your brain and bury you in sludge" kind of post, but "New West Motel" by the Walkabouts is just such an overlooked yet classic album that I had to post it.

This is very Neil Young-esque ("Like a Hurricane" is even covered), western, folky, experimental rock. This album was released in 1993 and is really steady and catchy, dark at times, and has everything from psychedelic keyboards to acoustic guitars to strings. It conjures images of roadtrips and driving down a dusty highway; in fact, its a great soundtrack for doing exactly that... or just sitting around with friends. Well it's a good album for any situation, really. Enjoy. 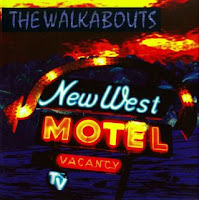 Bonus Vinyl-Only Tracks:
15. Yesterday is Here
16. Like a Hurricane
17. Prisoner of Texas