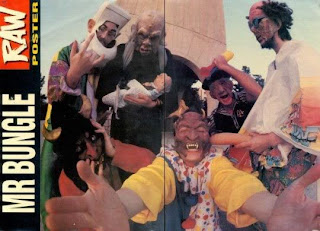 well...i've been away from the blog for awhile

and i'm going to assume that like myself...you folks enjoy a good bungling

in my opinion...out of their 3 albums...i'd have to say that my favorites are SELF-TITLED and DISCO VOLANTE...but don't get me wrong...i do enjoy the CALIFORNIA album as well...but to me...it's somewhat bland compared to the rest of their material

and when faith no more reunited (and it feels so good) and embarked on their THE SECOND COMING TOUR (the only north american dates taking place in mexico...though it's been said that more dates will take place in the future)...rumors were started that mr. bungle would be touring again as well (mostly started by me)...but honestly...i think mr. bungle did everything they could possibly do...and the next logical step in the bungle-esque direction was taken in the band fantomas

you folks want the musics