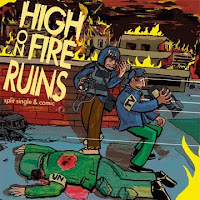 high on fire...you already know what they are and what they do

ruins...they were a japanese duo that played something akin to bands like godheadsilo and lightning bolt (i say "were" because bassist sasaki hisashi left back in 2004...and drummer/vocalist tatsuya yoshida is currently touring under the moniker of ruins alone)

not only do you get the jams...you also get a comic to go along with everything

all in all...it's a pretty sweet way to spend a few minutes

and now...i'm gonna provide you with some visual evidence on just how awesome drummer tatsuya yoshida is (what can i say...i'm a giver...just ask anyone down at the free clinic)