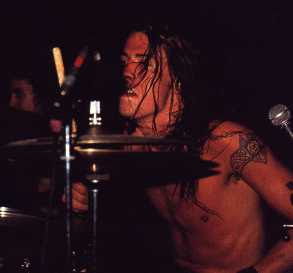 i'd originally posted this over on my shiny grey monotone blog...but i figure that there are more than a few dave grohl fans over here as well...but i've thrown on a little extra for you folks that SGM didn't get (that being the queens of the stone age and them crooked vultures stuff)

don't say anything as SGM is pretty jealous and might do a little bit of watering your lawn or something...if you know what i mean


a friend of mine is in a band...and they wrote a song called "dave grohl,put the guitar down...this is an intervention"

no truer words have been spoken/written (well...there probably have been...just go with me here)

i've never really been a foo fighters fan...and the only song i've been able to listen to more than once was a cover of the gary numan jam "down in the park" that was put on the SONGS IN THE KEY OF X: MUSIC FROM AND INSPIRED BY THE X-FILES soundtrack released back in 1996 (and really...it's 1 of 4 reasons to own it...the others being "red right hand" by nick cave and the bad seeds and "star me kitten" by rem w/william burroughs and "unmarked helicopters" by soul coughing)

as you may already know...he played for some band called nirvarna (or something like that) back in the 1990's...and before that he played in a band called scream out of washington dc...and he's played drums in various other bands (queens of the stone age...nine inch nails...killing joke (which is ironic because they tried to sue nirvana over a riff that was "stolen" from their song "eighties" and used in the nirvana song "come as you are"...which i will admit...sounds similar)...tenacious d)

but we're talking about nirvana here

before he joined the band back in 1990...the band had went through a string of drummers: aaron burkhard...dave foster...chad channing...

and then they had some guy named dale crover take over the stool for a bit...it was as if it were natural progression...then came dave grohl

and to be honest with you...the first time i heard nirvana (which was via mtv showing the "smells like teen spirit" video every 10 minutes) i wasn't really all that impressed...but the more i listened to it...the more dave grohl's beating the drums like they owed him money style beat it's way into my head

now i could continue to gush like a head wound about the man...but i'm not going to

this is some nirvana music with everything else turned down (so if you wanted to...you could impress the chicks by throwing this on the stereo and sitting behind a drum kit and be all like "hey ladies...check this action out!"...and you could mime your way into some girl's panties)