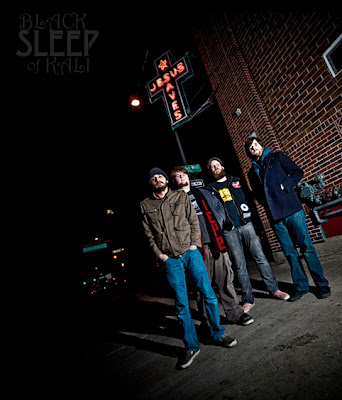 I haven't written a feature in a while, but there have been a few events that have forced this band to my attention as of late and so I feel the need to rave about them a bit.

What events, you say? Well, a couple of weeks ago I read about Black Sleep of Kali on the Small Stone website, boasting their sound as "a 200 ton monolith emanating riffs of doom causing all who approach it to bang their heads into epic rock oblivion." Obviously my attention was grabbed, and so I got ahold of their first self-titled effort and jammed it out, then a week or so later serendipitously received an e-mail from Black Sleep of Kali urging me to check out their band (done and done!), along with a copy of their upcoming Small Stone release, "Our Slow Decay," which will be released on August 24th on the label.
After listening to "Our Slow Decay", I can safely say... this is a band that deserves your attention. This is a truly addictive release, and kind of sounds something like an unholy lovechild of Isis and Big Business - massive riffs, rocking catchiness and post-metal aesthetics and influence minus the monotony that can sometimes come with it. The other thing I love about this band? The fact that they came about thanks to a classified ad on the stonerrock.com message boards. I can safely say (without a hint of sarcasm) that coming to learn this fact has made me respect BSOK even more - commitment and music nerdery always makes for the best written tunes. I'm not going to be a spoilsport by leaking this since it's not out for another month, but mark your calendars and keep an eye out for this band... and in the meantime, hit up their myspace and listen to some of their tracks, including a rager from their upcoming release called "The Crow and the Snake".