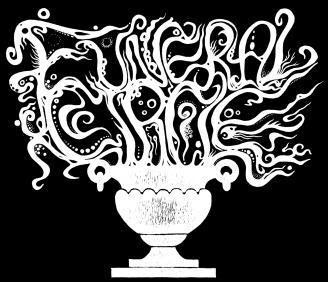 This is a pretty eventful day as I've finally finished my first real feature for this site and it's with up-and-coming Canadian doom giants Funeral Circle. This is a band that creates crushing doom metal from it's purest source with influences like Saint Vitus, Pagan Altar and Candlemass. Their material is satisfyingly slow, intricately evil, dripping with heaviness... and of course serves up a nice helping of misery on the side. The band has provided an upload of their mammoth song "Homunculus" here, and you can listen to the furious EP title track "Sinister Sacrilege" here. I suggest you listen to both as it will be worth your while! I seriously can't uptalk this band enough.

...And do I still have more to say, you ask? Of course I do! Below is an interview I conducted with the guitarist of Funeral Circle with whom I've shared a good number of conversations about doom metal, fruitlessly debated what stoner rock should be called and (of course) worshipped at the Pagan Altar with. He's full of interesting information and so you should take the time to read this if you're into doom or heavy music at all, or want to hear about the newest heavy metal supergroup called Motorvenom Sabbathead. Enjoy.

Cara: Hey - first off I’d like to say thanks for taking the time for answering a couple questions. Funny how I used to talk doom with some of you guys in metal forums while you were just releasing your first tracks on MySpace. You seemed to get an overwhelmingly positive response then and now you have recently released an EP that’s still getting a lot of positive feedback. I’m sure things haven’t been as smooth-going as it’s seemed though - how has it been getting to that point?

Pilgrim: The pleasure is all mine, Cara. Thank you for the opportunity to do this interview.

To start off, getting to where we are now was only because of lots of hard work. When I formed this band, I didn't want it to be some "project" or some other nonsense like that. I was always a huge admirer of bands that understood metal as more than just music, it was a lifestyle to them. Funeral Circle is a huge part of my life, because as you well know, metal is my music and is an immense source of inspiration for me. I act more protective about it than I probably should, but I suppose anyone defends something they are very passionate about, well, very passionately...

After many line-up changes and playing a virtually non-existent form of metal in a city where horrid "extreme metal" projects rule supreme, it felt shitty to not get recognized the way I wanted to be. Before playing our first gig, I was thinking there would be real headbangers up front recognizing what we were doing, but of course that's far from reality.

However, we persisted and instead of investing all of our energy in the pathetic local scene (as I'm sure every local scene everywhere is equally as shit) we decided to take our music onto the internet (which was the only real way you could communicate with people around the globe who liked such music) and bring it to the Doom Metal circles. We recorded our first real demo which was some horrid rehearsal tape and it received a mild/lukewarm reception. This made me pretty happy, but I knew that we had something which was going to blow their minds away.

Fast forward a year or so, and another line-up change had occurred. We had gotten a new bassist, an old friend of mine, and we recorded our EP entitled "Sinister Sacrilege" which was released on The Miskatonic Foundation from the UK. It's still selling on both CD and 12" formats and the reception is has gotten blew me away completely. I wasn't expecting such great feedback. I just know that with our next release, we'll be taking things much higher and I am positive our strongest work is yet to come.

Cara: What have you been listening to lately? Anything that’s been influencing you or that you’ve been really enjoying that’s worth mentioning?

Pilgrim: My inspiration for this band derives from NWOBHM and Epic Heavy/Doom Metal. Albums that have had a huge impact on me are Solstice's New Dark Age, all of Pagan Altar's albums, Bathory's Hammerheart, Witchfinder General, Mercyful Fate and King Diamond (too much to name, simply amazing...), Saint Vitus' S/T, Satan's Court in the Act, Candlemass' Epicus Doomicus Metallicus, and of course the more obvious classics like works by Black Sabbath, Iron Maiden, Judas Priest, etc.

One album in particular that stands out lately is Scald's The Will of the Gods is Great Power. What a fantastic album, so much character and depth to it... It really reminds me why Doom Metal is the greatest music in the world (at least, to me). Such passion and emotion, and the atmosphere is unmatched. Most of all, it's Metal the way I like to imagine it. Stuck in that time where only the quality of the songs mattered, there was no desire to place experimentation above anything else (especially so 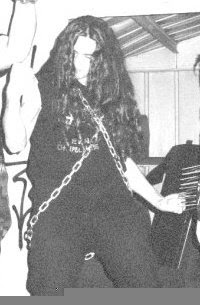 Also, one band that really had a huge impact on the songwriting and attitude of Funeral Circle was The Lamp of Thoth. The way they had a very energetic and charismatic approach to Doom Metal was great to hear, it gave it the music a character that I had never heard. I was floored with them, and they continue to excel. Real masters of this form of music, they should be far more appreciated by fans of any and every genre in metal. Props also to bands such as Orodruin, Slough Feg, Dark Quarterer... and many other I haven't mentioned. Really, I shouldn't be asked this questions! Too many great albums flood into my head!!

Cara: It’s not often you see legitimate doom metal bands hailing from Canada which is why it’s awesome to see a band like Funeral Circle doing so well for yourselves. While I’m on that topic, do you have any opinions about the doom metal scene here in Canada?

Pilgrim: Well, I can certainly comment on Canada's metal scene. It seems like the doom scene is finally starting to take shape with bands like Dark Covenant, and another one I discovered called Father which I thought was cool. They are both from Quebec and the Maritimes, respectfully.

When it comes to Canadian metal overall... I think we have a very rich history of unique sounding bands, and great Heavy Metal... especially here in Vancouver! Bands like Thor, Black Knight, Assault... Fantastic!! Even stuff like Slaughter, Razor, Witches Hammer, Blasphemy, and Voivod... Absolutely devastating metal, Canadians always seem to raise the bar when it comes to that sort of stuff. In the East they also had great old-school bands like Overlord, Sword, Witchkiller/Aceium... All fantastic stuff, I just wish Canada was in that time instead of all this atrocious technical death metal we're known for... Fucking rubbish... We can't forget RUSH as well, very great band.

I also want to make note of those elusive bastards in Tales of Medusa, a great old-school heavy metal band from Vancouver who hide in the shadows... I am at least happy there has been more vitality in the original spirit of metal.

At the end of the day, we aren't too concerned with the doom community in Canada. It would be very nice to have more doom metal bands, but I think the people in Canada are more into extreme stuff... that being said, we ourselves in Funeral Circle have tons of good times doing what we do. We don't do what we do because it hasn't been done before, there is no point to that - It's because it's what we like to do more than anything else.

Cara: Have there been any cool/surreal moments or experiences that have happened to you as a band that stick out as worth mentioning?

Pilgrim: Well, I can definitely say the most surreal moment was having Rich Walker from The Miskatonic Foundation ask us to release our EP. I've always admired him as being a total "no compromising" mother fucker who says what he means and means what he says. It's way to hard to find people like that when it really shouldn't be. His vision of metal is in tune with ours because we think crushing posers and telling assholes in shit bands to fuck off while playing in our own bands is the way to live out the rest of our lives... haha!!

Playing live is always great too! It's great to finally have some fans in town who cheer to certain sections of our songs and pump their fists in the air... Very metal!! I like it!!

Cara: Here’s a kind of tired out question that I always enjoy asking anyways - what would be your dream line-up for a band if you could pick and choose absolutely anyone for any instrument? (You can’t just say Black Sabbath, either!)

Pilgrim: The original line-ups for Venom and Discharge back together! Also, they need to rewind their brains back to 82. Wait does that count? Okay, so seriously... my dream line-ups for a band... heh, can I say Pagan Altar? Sorry, I'm very unimaginative!!

Maybe we could mix the members of Black Sabbath, Venom and Motorhead together in one band? Yeah... I like that, Motorvenom Sabbathead... Very crushing!!!!

Cara: Lastly, what are your plans at the moment for any releases or tours in the future?

Pilgrim: We have two splits in the works with some great bands that will be announced in the future, and we also have a full length in the works which will be our best effort, I guarantee it! Also, to all you Europeans reading this, expect to see us playing there soon enough!!!

Lastly, thank you Cara for the interview. Take care, and Doom On!!! 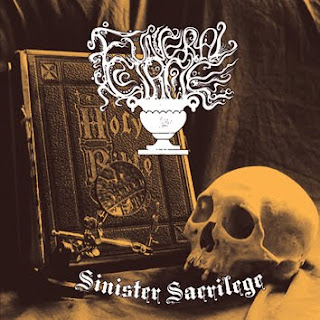 Do you like what you hear? You can order their EP "Sinister Sacrilege" from:
http://www.hellridemusic.com/ (CD)
or http://www.katholicmagick.org/ (vinyl)
Posted by Cara at 9:35 AM