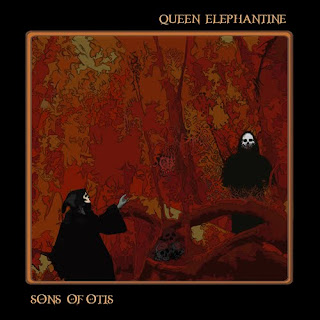 I'm sure everybody knows of the crushing and spacey Sons of Otis - well here's their split with Queen Elephantine, a younger, lesser known group of a similar musical branch. The first two tracks on this split are by Sons of Otis and plod and drone through a thick wall of sludge and sonic psychedelia, and the Queen Elephantine track is a tribally heavy, epic finish to this other worldly experience. All in all this split is apocalyptic, chillingly psychedelic and crushingly medatative... a perfect soundtrack to make this depressing and chilling month called February even more depressing and chilling.
1. Tales of Otis (Sons of Otis)
2. Oxazjam (Sons of Otis)
3. The Battle of Massacoit / The Weapon of the King of Gods (Queen Elephantine)

On another note I'm finishing up a couple of features for the near future that are worth getting stoked about so stay tuned.... and if you like what you're reading do me a favor and follow this blog! (I like being followed.) Thats all for now. Enjoy this.
Posted by Cara at 12:00 PM