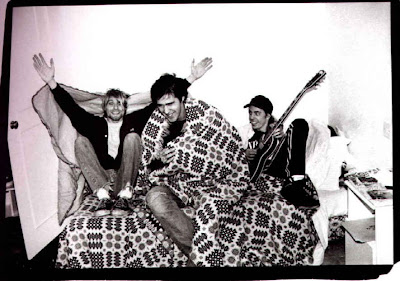 in my opinion...nirvana always came off better in a live setting

and i'll admit that when the world was first going through the nirvana mania...i wasn't so impressed...the first time i saw the video for "smells like teen spirit" on the mtv...it didn't leave any sort of impression on me (hell..what did i know...i was a shitty little metalhead back then)

i even passed up a chance to go and see nirvana during the NEVERMIND days (maybe i should've eaten a bullet for that...oh yeah...i went there)

but somewhere down the line...this dirty little caterpillar emerged from it's iron maiden (see what i did there?) and that stuff called grunge washed over me (luckily...i didn't really need to change the way i dressed for that business)

but enough about me

there's a lot going on during this show (which was sponsored by a tobacco company)...from the on stage banter...to the first unveiling of the song "heart shaped box"...to an "intoxicated" kurt spitting on tv cameras and trying to destroy stage props and equipment (though you can't see that here...you'll have to go and watch your copy of LIVE! TONIGHT! SOLD OUT!!!...you do own a copy of that,yeah?...if not..there's this thing called the internet that will allow you to either watch it or perhaps find a copy of it for you)

"aneurysm" from this very show