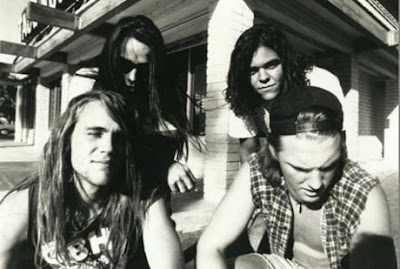 Hey everyone - I feel the need to quickly post this news as it's pretty exciting... from stonerrock.com:

No need for a long and boring history, just a few names should cover it all: Kyuss, Sloburn, Unida and John’s most recent band Hermano. Plus: side projects with The Crystal Method, Danko Jones and countless others who embraced this great singer from the Southern California desert. Why?Kyuss, the inventors of Desert Rock, have been in the last ten years much more popular than when they were still around in the early nineties. So, due to massive public demand over the years to play songs from his old cult band Kyuss, John finally made the decision to give the fans what they want. He will do this unique project with a few hand selected musicians.
Why the fuck not? The last couple of years John Garcia thought often about reviving his Kyuss-legacy on stage. The more he thought about it, the more he really wanted to do this. John: “I don’t want to do this just for myself, but especially for the fans. Both for the ones that have seen Kyuss live back in the days, and especially for the ones who haven't had that chance. This could be as close as they could get to the real thing. Please bear in mind that this could be a one-off unique opportunity!”

So? So that being said, the Garcia Plays Kyuss-project (alias GPK) was born. Garcia, accompanied by these fine selection of musicians, Bruno Fevery (guitar), Jacques de Haard (bass) and Rob Snijders (drums), will kick you straight in the face with an all Kyuss set. Pure desert punk it is, nothing more, nothing less... The legend himself John Garcia (born in San Manuel, Arizona, September 4, 1970) is a vocalist who has been a member of Kyuss, Slo Burn, Unida and Hermano. His vocals have become synonymous with modern stoner rock and the desert rock sound. While still in high school, Garcia help start Kyuss (originally known as Sons of Kyuss) in 1989 with guitarist Josh Homme. The band produced five albums in total, all of which featured Garcia on vocals. In October 1995, just three months after releasing what could be argued as their breakthrough album ...And The Circus Leaves Town (thanks to MTV airplay), Kyuss broke up. Their last recording was a 10" vinyl on the now defunct label Man's Ruin Records, which was later re-released on a split CD with Homme's soon to be famous project Queens of the Stone Age. The band has been on an indefinite hiatus ever since and has reached a legendary status, influencing thousands of new young (rock)bands.
GARCIA plays KYUSS links:
http://www.youtube.com/watch?v=n-3VYaYwQ80
http://www.myspace.com/kyussmyspace
http://www.myspace.com/garciavsgarcia
GARCIA plays KYUSS tour dates:
Fr 28.05.10 DUBLIN Andrews Theatre
Sa 29.05.10 GENT Vooruit
So 30.05.10 AMSTERDAM Melkweg
Di 01.06.10 KÖLN Underground
Mi 02.06.10 LUZERN Schuur
Do 03.06.10 ARAU Kiff
Fr 04.06.10 BOLOGNA Estragon
Sa 05.06.10 MÜNCHEN Feierwerk
So 06.06-10 WIEN Arena
Di 08.06.10 BERLIN Festsaal Kreuzberg
Mi 09.06.10 KOBENHAVN Loppen
Do 10.06.10 HAMBURG Übel & Gefährlich Fr 11.06.10 FRANKFURT Batchkapp"
Posted by Cara at 2:37 PM