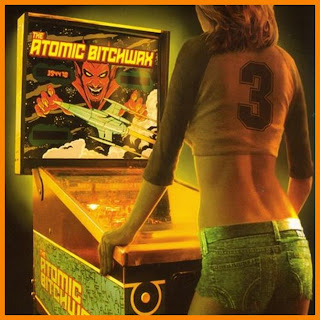 Well, the catchy weekend jams here at Ritual Room continue this Saturday with the Atomic Bitchwax's third album which is (appropriately) titled "3". For those who aren't familiar with the Atomic Bitchwax, they're a ripping heavy rock band containing members from the legendary Monster Magnet. I have to comment on the fact that upon first glance this album may appear to be your stereotypical stoner rock gimmick (could it be beacuse of the image of a half dressed girl playing a pinball machine with a devil on it?) but I can assure you this is heavy rock done damn right.

The Atomic Bitchwax is a band that doesn't take themselves too seriously but still manage to produce some really intricately solid rock n' roll that is, of course, a lot of fun. This album showcases a great side of Bitchwax, throwing a twist of sarcastic anger in as they rip their way through adrenaline pumping riffs, tight-as-can-be song writing and tongue in cheek lyrics. So why waste your time with lame and gimmicky stoner rock bands? Listen to "III" and, if you must, take off some of those hot, restricting clothes and head over to your local arcade.