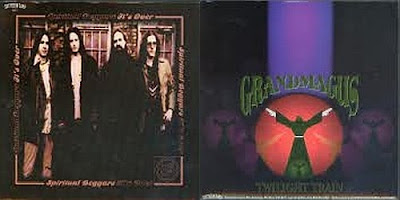 It seems I haven't made a post here in a couple of days but it's mostly becuase my musical exploration has been pretty limited as of late. (what I've been listening to basically consists only of Grand Magus and the previously posted Egypt demo). On that note, here's a cool Grand Magus / Spiritual Beggars split that was released on Southern Lord shortly before Grand Magus released their first album! All in all this is a pretty cool, rockin' split single although I'm not really sure how to feel about the Spiritual Beggars... It's kind of a mix of like/dislike/awe that that guy from Arch Enemy is also in a band with JB Christoffersson. JB's work with Grand Magus is obviously a lot cooler but this split actually highlights a strong side of Spiritual Beggars and a weaker side of Grand Magus. (Go figure.)