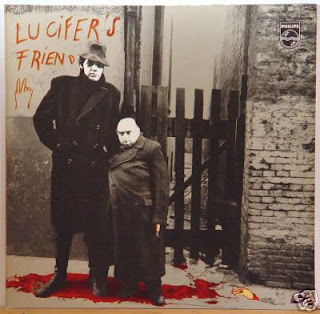 Delving into 70's heavy/psychedelic rock can be a fairly overwhelming (yet, of course, ultimately satisfying) process since there's a ridiculous amount of excellent hidden gems to discover and yet a lot of crap to wade through. I've been a bit obsessed with digging up these said gems lately thanks to a friend's influence, and I'm actually posting this album on their riff-loving behalf because it rules and writing about this stuff is my bread and butter.
So what album am I speaking of, you ask? Well, lately I've been really into this self titled album by Lucifer's Friend from 1970, which mixes an awesome groove with Dio-esque vocals, insanely cool lyrics, a bluesy backbone, heavy riffs and psychedelic organs. I've heard a lot of comparisons to "Black Sabbath meets Led Zeppelin" for this band which I think is a pretty fitting description despite it being a bit of a general and generic one. (Not only that, but I remember reading somewhere that Led Zeppelin actually ripped off Lucifer's Friend... But really, who didn't they rip off?) My point is that this album will draw you in right from the first second and will have you hooked until the very last beat.
1. Ride the Sky
2. Everybody's Clown
3. Keep Goin'
4. Toxic Shadows
5. Free Baby
6. Baby You're A Liar
7. In The Time of Job When Mammon Was a Yippie
8. Lucifer's Friend
9. Rock n' Roll Singer
10. Satyr's Dance
11. Horla
12. Our World is a Rock n' Roll Band
13. Alpenrosen
DL: "Lucifer's Friend ST"
Posted by Cara at 10:13 AM