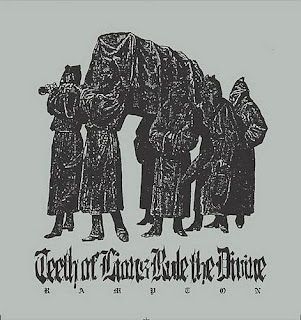 What do you get when you put Stephen O'Malley and Greg Anderson in a band together? Well, about a thousand different titles come to mind. What do you get when you throw Lee Dorrian and Justin Greaves in the mix? You get Teeth of Lions Rule the Divine. The title is a reference to an Earth track, and this is their first and only release titled "Rampton".
Now... before you expect a bunch of feedback from Sunn amps with Lee Dorrian howling 400 pitches per second over it, let me just say that (thank god) that is not the case. Not only is this tastefully done, drenched in misery and filled with an unholy atmosphere and painfully slow riffs, but Lee Dorrian's vocals are actually tolerable... no, enjoyable, here! Also, this has to be one of the coolest things I've heard from O'Malley and it's not even recorded in an abandoned cathedral and the characters "0)))" are nowhere to be seen. This album even contains a goddamn Killdozer cover! This was, of course, released on Rise Above and Southern Lord and is just a really cool release (without desperately trying to be cool... take note, O'Malley and Dorrian. I hate because I care).
1. He Who Accepts All That is Offered (Feel Bad Hit of the Winter)
2. New Pants and Shirt
3. The Smiler
DL: "Rampton"
Posted by Cara at 10:52 AM