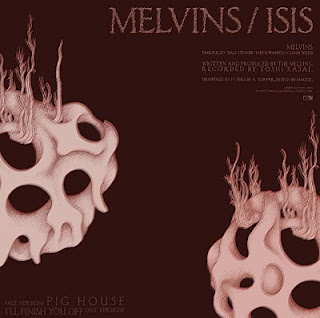 I just noticed the final images for the Melvins/Isis split 12" being posted on Aaron Turner's blog, so here they are! I'm going take a guess and say there will likely be some different pressings of colored vinyl for this as well since, well, it's a Hydra Head release. This is the finished artwork for the split and the track listing is as follows: 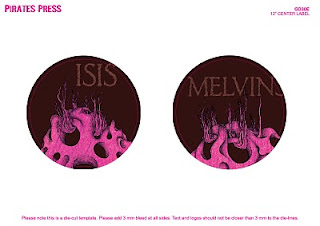 "above: layout images from the forthcoming ISIS/MELVINS split 12". i supplied the illustrations, mackie osborne completed the layout. the 12" is intended to be released to coincide with the upcoming isis and melvins tours, during part of which the 2 bands will be touring together. if all goes with smoothly with print and vinyl production this plan will become actuality..." -from artist Aaron Turner's blog - read and see more here

Hopefully we'll actually see a release of this during the upcoming Melvins tour and HH will get their shit together on time (unlike with (A)SA). The new Melvins album "The Bride Screamed Murder" will be released June 1st also on Hydra Head.

On a more irrelevant note, I've been out of town for the past few days and my internet connection here has been beyond horrendous. Trying to upload albums is painstaking and pretty much impossible with hours of waiting and my computer freezing every couple of hours so I'll probably just skip the uploads until Thursday when I'm back home. (This is mostly in reference to the Screaming Trees covers I promised to post today.)
Posted by Cara at 2:11 PM