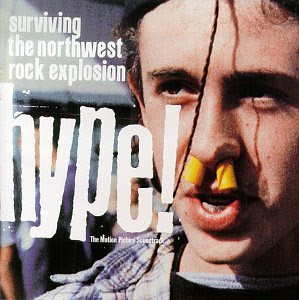 I have to admit that "Hype!" (a documentary about the whole grunge movement) was a pretty interesting, well done film. It easily could have gone a lot of terrible ways and so I was relieved and happy to see that it did a good job of poking fun at the ridiculousness of the whole grunge thing while keeping the legitimacy of a lot of the music alive. There were also a lot of good interviews with influential, interesting people like Jack Endino, Mark Arm, Charles Peterson, Jon Poneman and Bruce Pavitt.
My point is that films like this have to be cherished, especially with the impending release of a Kurt Cobain biopic being seen over by Courtney Love (read more and lol here). I would rate "Hype!" above "Singles" (ugh) and below "Busted Circuits and Ringing Ears" on the imaginary scale of grunge movement films. So all that being said, I now present to you now the best part of the whole "Hype!" experience which is, of course, the soundtrack.
1. Fastbacks - K-Street (live)
2. Wipers - Return of the Rat
3. The U-Men - Dig it a Hole
4. Green River - Swallow My Pride (demo)
5. Soundgarden - Nothing to Say
6. Mudhoney - Touch Me I'm Sick (live)
7. Nirvana - Negative Creep
8. Some Velvet Sidewalk - Mousetrap (live)
9. Dead Moon - 54/40 or Fight (live)
10. Girl Trouble - My Hometown
11. Tad - Giant Killer
12. Gas Huffer - Hot Cakes (7" version)
13. Young Fresh Fellows - Low Beat
14. Supersuckers - I Say Fuck (live)
15. 7 Year Bitch - Knot (live)
16. The Gits - Second Skin (live)
17. Flop - Julie Francavilla (demo)
18. the Posies - Throwaway (live)
19. Pearl Jam - Not For You (live)
20. Mark Lanegan - The River Rise
21. Pigeonhed - Fire's Coming Down
22. Fastbacks - Just Say
23. Sara Debell - Smells Like Teen Spirit (muzak version)
DL: "Hype! Soundtrack"
Posted by Cara at 10:00 AM