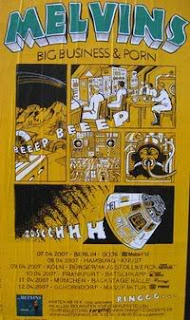 this is the entire concert

and i'm going to take this opportunity to say a little something about the current state of the melvins...

when they'd released the (A) SENILE ANIMAL album...i was kind of stoked to hear what they'd sound like with 2 drummers and playing as a 4 piece (as they'd taken in the band big business)...and as soon as i'd heard songs like "civilized worm" and "the hawk" i was all like "fucking yes!"...and i listened to the album quite a bit...but then it suddenly lost it's luster with me (maybe because of my constant playing of it)...and then they released the NUDE WITH BOOTS album...and i hate saying it...but i was pretty bored with it...as soon as the opening moments of "the kicking machine" i automatically thought of led zeppelin (which is a good thing)...and it seemed as if the band had drifted off into 1970's fm radio-land...even when they sounded as if they'd brought back the old melvins via the beginning of "dog island"...it still didn't seem right...are you like me and miss the days of the melvins trio?...you know...back in the days of GLUEY PORCH TREATMENTS/HOUDINI/STAG/PRICK...in my opinion...the band hasn't released a melvins-y album since 1999's THE BOOTLICKER...and reading the interview with buzzo a few spaces down he eludes to the recording of an upcoming album saying "it`s going to be different than what you might imagine. and not in the way you might imagine."...perhaps they'll be going back in time...but really...the melvins don't seem to be the kind of band that does that...maybe they'll throw in an orchestra...maybe they'll get all pink floyd's THE WALL...but they'll more than likely keep on making music for themselves

now for the reward

as for the order of bands on this particular show...i think it went as follows: